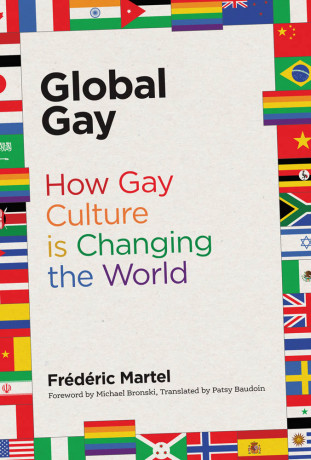 How Gay Culture Is Changing the World

A panoramic view of gay rights, gay life, and the gay experience around the world.

In Global Gay, Frédéric Martel visits more than fifty countries and documents a revolution underway around the world: the globalization of LGBT rights. From Saudi Arabia to South Africa, from Amsterdam to Tel Aviv, from Singapore to the United States, activists, culture warriors, and ordinary people are part of a movement. Martel interviews the proprietor of a “gay-friendly” café in Amman, Jordan; a Cuban-American television journalist in Fort Lauderdale, Florida; a South African jurist who worked with Nelson Mandela to enshrine gay rights in the country's constitution; an American lawyer who worked on the campaign for marriage equality; an Egyptian man who fled his country after escaping a raid on a gay club; and many others. He tells us that in China, homosexuality is neither prohibited nor permitted, and that much Chinese gay life takes place on social media; that in Iran, because of the strict separation of the sexes, it seems almost easier to be gay than heterosexual; and that Raul Castro's daughter, a gay rights icon in Cuba, expressed her lingering anti-American sentiments by calling for Pride celebrations in May rather than June. Ten countries maintain the death penalty for homosexuals. “Homophobia is what Arab governments give to Islamists to keep them calm,” one activist tells Martel.

Martel finds that although the “gay American way of life” has created a global template for gay activism and culture, each country offers distinctly local variations. And around the world, the status of gay rights has become a measure of a country's democracy and modernity.

This English edition, which has been thoroughly revised and updated, has received the French Voices Award for excellence in publication and translation, supported by a grant from the French-American Book Fund.

Frédéric Martel, a researcher at Sciences-Po Paris and ZHdK Zurich, is the author of nine books, the host and producer of the French radio show Soft Power, and foreign affairs columnist at Slate.fr.
Support