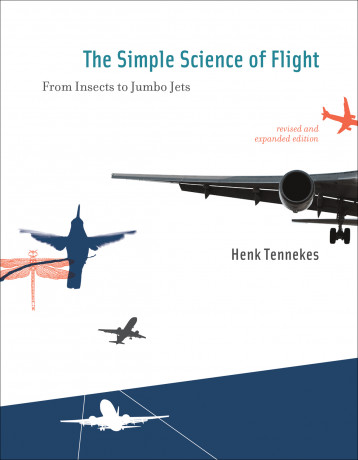 The Simple Science of Flight, REVe

From Insects to Jumbo Jets

An investigation into how machines and living creatures fly, and of the similarities between butterflies and Boeings, paper airplanes and plovers.

From the smallest gnat to the largest aircraft, all things that fly obey the same aerodynamic principles. In The Simple Science of Flight, Henk Tennekes investigates just how machines and creatures fly: what size wings they need, how much energy is required for their journeys, how they cross deserts and oceans, how they take off, climb, and soar. Fascinated by the similarities between nature and technology, Tennekes offers an introduction to flight that teaches by association. Swans and Boeings differ in numerous ways, but they follow the same aerodynamic principles. Biological evolution and its technical counterpart exhibit exciting parallels. What makes some airplanes successful and others misfits? Why does the Boeing 747 endure but the Concorde now seem a fluke? Tennekes explains the science of flight through comparisons, examples, equations, and anecdotes. The new edition of this popular book has been thoroughly revised and much expanded. Highlights of the new material include a description of the incredible performance of bar-tailed godwits (7,000 miles nonstop from Alaska to New Zealand), an analysis of the convergence of modern jetliners (from both Boeing and Airbus), a discussion of the metabolization of energy featuring Lance Armstrong, a novel treatment of the aerodynamics of drag and trailing vortices, and an emphasis throughout on evolution, in nature and in engineering. Tennekes draws on new evidence on bird migration, new wind-tunnel studies, and data on new airliners. And his analysis of the relative efficiency of planes, trains, and automobiles is newly relevant. (On a cost-per-seat scale, a 747 is more efficient than a passenger car.)