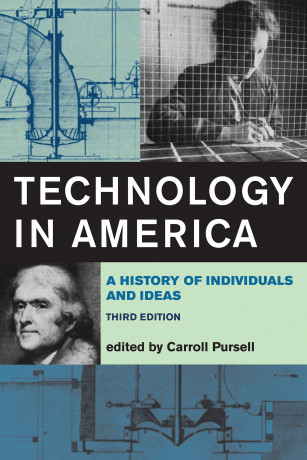 A History of Individuals and Ideas

The new edition of a popular collection that traces the history of American invention from the age of the artisan to the era of Silicon Valley.

This volume traces the history of American technology—its inventions and inventors—from the age of the artisan to the era of Silicon Valley. The focus on inventors acknowledges that technology is a fundamental form of human behavior and that, ultimately, it is people who have the ideas, design the machines, and build the institutions. These accessible and succinct essays chronicle the work of the famous—among them, Thomas Jefferson, Eli Whitney, and Thomas Alva Edison—and of the sometimes forgotten—including Ellen Swallow Richards, the founder of the home economics movement. One illuminating essay shows how Buster Keaton and Charlie Chaplin helped Americans confront the modern technological age.
This third edition retains the content of the first two editions and adds three new essays: on Rachel Carson and the rise of the environmental movement; on A. C. Gilbert and the development of an American toy industry; and on Lewis Latimer and the struggle of African Americans to gain recognition as professional inventors and engineers.