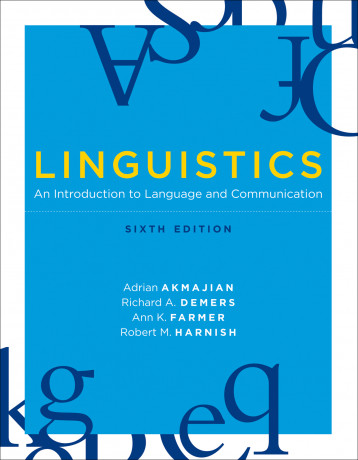 An Introduction to Language and Communication

This popular introductory linguistics text is unique for its integration of themes. Rather than treat morphology, phonetics, phonology, syntax, and semantics as completely separate fields, the book shows how they interact. It provides a sound introduction to linguistic methodology while encouraging students to consider why people are intrinsically interested in language—the ultimate puzzle of the human mind.

The text first treats such structural and interpretive parts of language as morphology, phonology, syntax, and semantics, then takes a cognitive perspective and covers such topics as pragmatics, psychology of language, language acquisition, and language and the brain. For this sixth edition, all chapters have been revised. New material includes updated examples, new special topics sections, and new discussions of the minimalist program, semantic minimalism, human genetic relationships and historical relationships among languages, Gricean theories, experimental pragmatics, and language acquisition.

The organization of the book gives instructors flexibility in designing their courses. Chapters have numerous subsections with core material presented first and additional material following as special topics. The accompanying workbook supplements the text with exercises drawn from a variety of languages. The goal is to teach basic conceptual foundations of linguistics and the methods of argumentation, justification, and hypothesis testing within the field. By presenting the most fundamental linguistics concepts in detail, the text allows students to get a feeling for how real work in different areas of linguistics is done.

The late Adrian Akmajian was Professor of Linguistics at the University of Arizona.

Ann K. Farmer is an Information Engineer at Google.

The late Robert M. Harnish was Professor Emeritus of Philosophy and Linguistics at the University of Arizona.